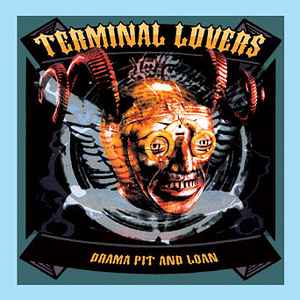 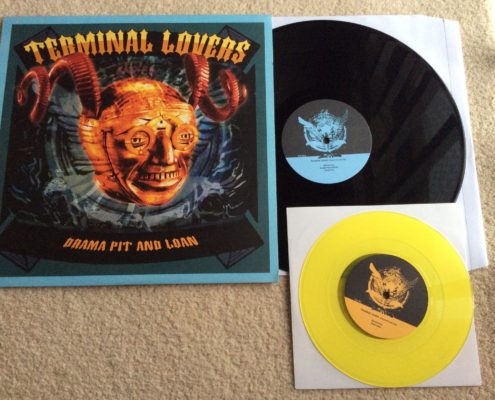 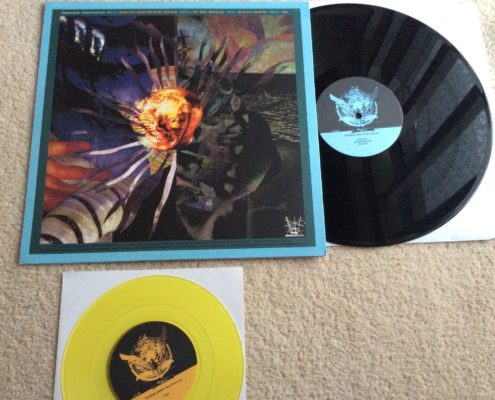 “Immediately this motherfucker dropped on to the stereo, I knew I was in the presence of True Heads with One Eye fixed on the lunations of the heavens. That the album etched its way directly into my brain on first hearing is startling, for I listen to shitloads of new stuff and mainly wait for their turgid meandering self-obsessions to struggle to locate any dignified conclusion. And after the deep art-rock invention of Terminal Lovers, most of the so-called stoner rock gathering in their masses is just so much novelty compost.

Watt a way to kick the New Year in! Dammit, this record is the goods – usable, crushing, cremating, resurrecting and the ROCK!!! Terminal Lovers are dragged around by their collective hooter by one helluva talented snot-nosed longhair called Dave Cintron, a Cleveland guitarist/artist/McJagger-esque howler with a permanent boner that would tear Sir Lord Mick’s tight asshole apart purely for the pleasure of dissing the ancestors, if (strike that and make it WHEN) he gets the chance. Did you ever wish Woody Leffel coulda permanently pushed Cleveland’s Granicus to the same cultural corners he hounded ’em into on the ever-ascending ‘You’re in America’ and that Viet-mawkish/dorkish 11-minute sub-sub-Stairway epic ‘Prayer’? Well, Terminal Lovers reach it often and in spades, motherfuckers! (What is it about Cleveland, brethren? Is the city really THAT fucking dreadful?) Terminal Lovers is garage-y as White Lightning’s ‘William’, smacktastic as Jane’s Addiction, demented as The Outcasts’ ‘1-2-5 Blair’ and still as simultaneously smart AND despairing as a Kim Fowley, Kurdt Kobain or Bobby Liebling. Did you ever wish the Iggy-meets-Zappa blackface voice Axel adopted for ‘It’s So Easy’ had abandoned its owner and gone solo? It did, boys’n’girls. It snuck into the plumbing of Everytown USA and called itself Dave Cintron. Now it’s mumbling the lyrics to ‘Rising Tide’ from inside the cistern of each and every corporation washroom. Imagine Iggy reconstituted as the same Muppet that intoned their freak hit ‘Mnah Mnah’ and you’ve got the voice Cintron adopts for addressing his mysterious female Muse. This is one confident motherfucker and she’s as tricky as Salvador Dali’s Gala at the very least.”
Read the full Drama Pit & Loan Overview

“Totally unlike anything else on Shifty Records, the home of normally gnarly, underground sludgecore and doom from bands like Fistula, Raw Radar War, Consular, Boulder, Hey Colossus, Vog, Monarch!, Dot, Ultralord, Rue, Moho, Rwake, Noosebomb, Ramesses, Rue, Fleshpress, and likeminded purveyors of lethal hardcore-tinged molasses violence. Nope, there isn’t anything sludgy or doomy about Terminal Lovers, but they are definitely heavy at times, and constantly weird, and VERY psychedelic. This is the only album that Terminal Lovers have released so far, and it’s amazing. A virtual supergroup of Cleveland art rock heavies, Terminal Lovers are comprised of Dave Cintron )Dimbulb, Downside Special, Speaker/Cranker?, Steve Mehlman (Pere Ubu, Rocket From The Tombs), Don Depew (Cobra Verde, Guided By Voices), Chris Smith (Keelhaul), and Scott Pickering (Pufftube, Prisonshake, My Dad Is Dead), and play an arty, super catchy form of psychedelic rock that goes from the supercharged stoner Maiden gallop of “Darkest Hour” to intricate quirky pop with some of the best alt rock hooks of the goddamn decade, to epic prog workouts with jawdropping drumming, killer krautrock jams, and Funhouse punk riff stomp….I’m a total douche for sleeping on this for the past couple of years, knowing of it’s existence but not giving it a shot thinking that it wasn’t going to be up to the usual standard of Shifty sludginess. It’s been my loss, ‘cuz this album is one of the raddest third-eye rock discs yer going to hear, tapping the collected vein of primal Stooges, Monster Magnet in mellow mode, the damaged rock approach of Beefheart, free-drone diving, muscular krautrock, the finest ’90s indie rock vibes, swept over with Hawkwind style space rock effects and amazing lyrics to boot. Highly recommended !!”
Dot Shop

“This is a melodic, twisted and perverse LP of songs like rock anthems gone terribly wrong, experimental demonic pop waiting to be found by bent kids on weed. Its all enough Fidel Castro:ish off center to question the sanity of this guy, the sessions offered are desperate, deranged and the words of absolute no wisdom are downright psychopathic. A strange little fuck of a record this is. The true meaning of bold POST rock standing with razorsharp knives acting as its very outpost. This beast LP comes with a bonus 7″ of likewise untender meanderings between Coil in a roll and Captain Beefheart gone completely Da Da.”
Tangerine Magazine
Glenn Tillman

“This is not like any CD Shifty Records has sent me to review in the past. More melodic, more traditionally structured, but in some other ways more twisted and perverse. These songs are like rock anthems gone horribly wrong, pop songs from hell, or music that hopelessly bent kids on acid might listen to in one of those bizarre flashback sequences in a David Lynch movie. That’s my way of heaping enormous praise on this CD. The melodies are all enough off center to question the sanity of the songwriter, the playing is desperate and deranged, and the lyrics are downright psychopathic, full of paranoid thoughts, neurotic obsessions, murder, suicide, and totally weird symbolic imagery. This is so strange it changes the synapses in your brain with repeated listens. The vocals sound like Dr. John on peyote and the subject material and lyrical twists and turns would confound and confuse Roky Erickson. This is rock music creativity at its bravest. Rock music played at the furthest outposts of the musical twilight zone. Any song with lyrics that start with “My true colors darken and dance in this garden of throats” is gonna satisfy even the most dedicated Captain Beefheart da da rocker’s quest for the unusual. Fascinatingly brilliant.”
Daredevil Magazine

“Now here is some really different rock and roll right here, this is certainly not your typical stoner stuff nor is it something to listen to as background music, cause there is a lot going on here. Terminal Lovers is a project that is lead by Dave Cintron and he’s got together an all star cast of players to play different instruments on this record and the end result is diverse and totally awesome. First of all the songs, don’t follow any set pattern, this is one of the most varied rock records I’ve heard in awhile. You’ve got some driving jams, like “Darkest Hour” and “Polar Sun”, that are full throttle rockers that contain a raw energy and are jam packed with melodic, pissed vocals and heavy riffs and then they pull off a 10 minute+ epic like “Rising Tide” that runs a gamut from gentle, quiet moments to some double bass drum parts and a finish that descends into electronic sounding drumbeats. I mean, not one song on the entire album sounds like the one that came before it and that is a great thing for certain. Great vocals throughout the entire album too, they vary a lot but it’s a really subtle, and cool variation and the musicianship is extremely tight. This is a great disc, that I think will appeal to a wide variety of tastes. It’s a little bit psychedelic, classic rock, stoner, metal and even a little bit poppy at times (but not in a bad way!) and the sound comes together great. I highly recommend you check this one out, but close minded bastards need not apply. Rock!!!”

“ It’s easy to see why Cobra Verde enlisted Dave Cintron to fill in for J. Mascis, Cintron plays with the same reckless emotion that’s rooted in the ragged glory days of Neil Young. Simply put, Cintron shreds and this album, a reissure of a disc released 2 years ago, sounds as potent today as it did when it first came out.
Remixed and expanded to include an extra 20 minutes of music and a bonus video, the new and improved Drama Pit also comes with fresh artwork – what looks like an about-to-explode mechanical head. It’s a fitting cover for an album that includes stoner anti-anthems, guitar acrobatics designed to please the most discriminating head banger and trippy freak outs. Cintron, who also plays in Speaker/Cranker, will hopefully get the extra exposure he deserves from this release.”
Stonerrock.com
Rob Wrong

“I am not entirely sure what to think about this CD…Terminal Lovers are definitely psychedelic guitar rock, but most of the time it is a bit more than just that. This has a really nicely done production that is layered and slick and seems to be almost built into their whole overall sound.
Talk about your eclectic musical tastes. ‘Terminal Lovers’ are obviously veteran musicians that all have serious chops. The intro track on the album sets an almost misleading pace at first by demonstrating just how good those guitar chops are with an Judas Priest/Iron Maiden almost approach and viscous heavy attack. At other times these guys get as melodic and hard rock/pop as Big Elf…Definitely a strange breed of animal all in itself if you know what I mean.
Not that the whole album is pop rock/metal either, there is plenty of almost acid rock jams along with the meticulous intricately done song writing… Mostly though, Terminal Lovers like to throw in super heavy psychedelic songs in there that are trance and weird. Lots of variety including acoustic styled numbers and busy bass reminding me of late 70’s Floyd, Velvet Underground and even the mellower Monster Magnet stuff at times.
These guys are very similar to Monster Magnet (for a lack of better comparison) as far as getting really poppy back to back with ‘heavy’, but make no mistake- these guys have their own style and do it well. Fans of Gallery of Mites might dig on this equally because of the songwriting style. Get this one if you like everything psychedelic and guitar heavy. Nicely done record that will get played a lot around here…tasty.”